The name Psammochromis is derived from the Greek ‘psammos’, sand + chromis, referring to the sandy substrata seemingly preferred by most members of the genus. 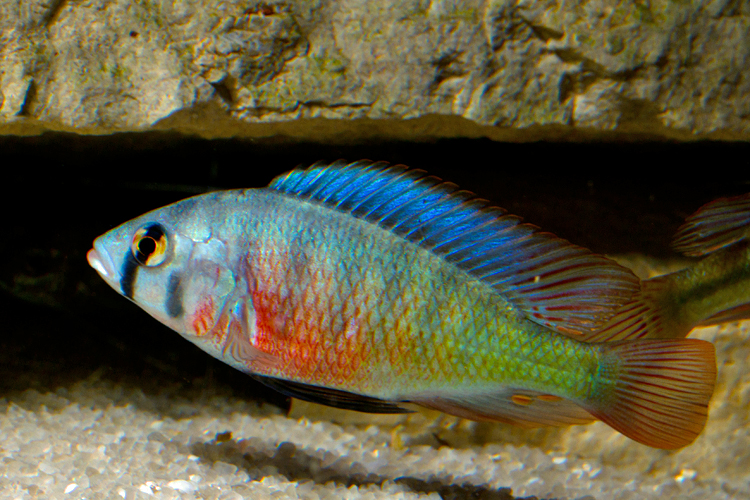 The species distribution is listed as Lake Victoria and possibly the Victoria Nile. The latter locality being surmised from the data given in the original description of the species. In his paper (Boulenger, 1911), the locality is given only as. Jinja, Ripen Falls, but in the introduction Boulenger implies that the entire collection of which riponianur formed part, was from the Victoria Nile. That is BELOW the Ripen falls, later (Cat.Afr.Fish .3,1914) the type locality is given more specifically as “Ripen Falls. Victoria Nile”. The H.E.S.T project also found P. riponianus in their research area of the Mwanza Gulf of Lake Victoria, this is the probable area from which the present Chester Zoo stock derive. I have been unable to attain exact collection points for the captive held populations.

As my group of fish are part of the Chester Zoo Captive Breeding Programme I’ve had to follow a few guidelines in the way I that I keep these fish. It is recommended that you have a minimum of three tanks per species. To keep within the recommended guidelines the following tanks are what 1 use to maintain this species in: – The adult breeding colony are kept in a 54 x 12 x 15 “, with a 18 x 12 x 12″ for brooding females and a 36 x 12 x 12 ” for growing on fry.

I first received my P. riponianus on the 22nd of October 1994, when they measured about an inch long; they were initially housed in a tank measuring 36 x 12 x 15″. However this was only a temporary measure, as, due to the reported pugnacious nature of the species, a larger tank would eventually be needed. They were moved after about six weeks into their present tank of 54″ where they have grown rapidly. The first male coloured up at about one and a half inches and proceeded to dominate one end of the tank up until January this year. Then a second male coloured up and took over the other end of the tank. This remained the position for about four months or so with them continuing to grow, then another four males took on the full adult coloration. It was at this time that things got a little “hairy” with a lot of “skirmishing” going on between the males and there were a few casualties.

The group now consists of six males and twelve females with all the males managing to breed at one stage or another. Breeding follows the typical pattern for mouthbrooders, with the female laying one or two eggs at a time, then picking them up in her mouth. She then mouths at the male’s egg dummies to fertilise them; this is done in the T position. Prior to the actual spawning act the male quivers and poses for the female in all his finery, this is when the male looks really magnificent. Spawning actually takes place on a rock or inside some large flowerpots or some other flat surface, each male having his own preferred site. This can take anything up to one and half-hours because of the constant interference from the other fish, but the female stays with her chosen mate until they have finished. The female then seeks some quiet area within the tank (not an easy job).

Normally I leave females in the tank for about 12 to 14 days and then remove them to a brooding tank. Brooding continues for between 19-21 days, when the female starts to release the fry.

Maternal care continues for a further 4 or 5 days after which she shows no interest. I remove the fry at this stage to the growing on tank, giving the females a rest and several good feeds before returning them back to the main tank.

I have found that there are no problems in returning them like this, they seem to get accepted straight away. The broods were quite small to start with, averaging about 1 1-15, but now after a year the broods number 25-30, with 38 being the largest so far.

Also I have experimented with leaving the females in the main tank for the full term, but none of the fry have ever survived more than a few minutes after being released. They are preyed on immediately and the female is unable, or unwilling, to provide sanctuary. It seems as soon as one fish sees the female spit her fry out, then the rest of the colony zoom in on her and devour the fry. However I have not been witness to any of the females eat either eggs or fry through being stressed.

It’s not a good idea to mix broods that are over 3 months or so apart because the older ones tend to eat their younger cousins, this I have discovered to my cost. Growth rate is quite fast for the first 10 to 12 weeks, then seems to slow markedly. I don’t know whether this is down to some diet deficiency or some other unknown factor. Fry are fed on crushed flake microworms and Artemia nauplii if I can get it to hatch.

To date I have not had to cull any of the fry for deformities or being runts. This I think is due to having the six males breeding with all the females, giving a good gene pool and maintaining some sort of genetic integrity which is vital in the captive maintenance over a period of time.

One thing I have noticed with regards to breeding is the water temperature, during the summer with high temperatures we experienced; spawning was reduced to almost zero. The tank is on the top tier of a three tier rack and for a period of about three months the temperatures were in the region of about 80″ F to 85 “F. Having discussed this with fellow members of the Lake Victorian Cichlid Study Group, the general consensus is that they thrive best in the middle 70s.

All in all this species is proving to be a joy to keep and study, and 1 would urge anybody to give them a try.

This item was first published by the British Cichlid Association, whose copyright it remains.
britishcichlid.com