Menglun is a perfect stopover for fish aficionados. You have one of the best morning markets in the region. The market features all of the rich variety of the region’s fishes. The only problem is you have to get up early to snap up intact specimens, means specimens that are not gutted for sale. Usually fishermen arrive with their catch at 06:00 and start then to cut them open to remove the belly content – all what is in the visceral cavity.

Another reason for Menglun as a stopover is that you are at the bank of the Luosuojiang River which is considered a nursery stream for the Mekong’s aquafauna. The Luosuojiang River is a lowland stream at Menglun and still in rather good condition compared to many other streams in China. You can start a trip upstream the Luosuojiang River from Menglun. Or, you simply stay here for couple of days and enjoy the surrounding nature and the breathtaking sunrises and sets. 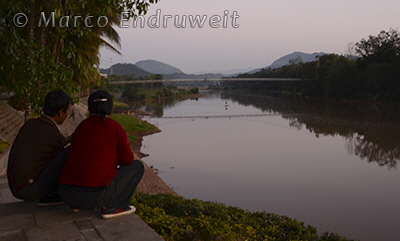 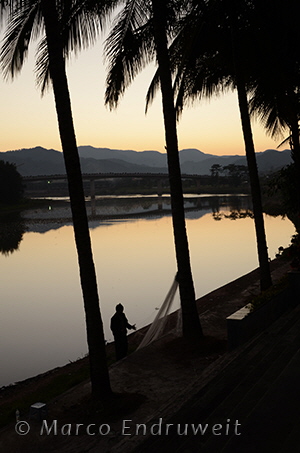 A fisherman repairs his nets at the bank of the Luosuojiang River. 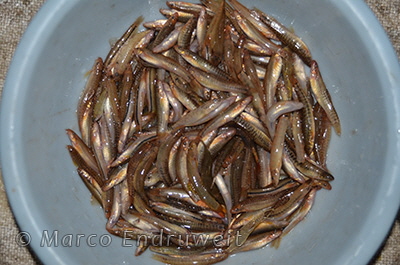 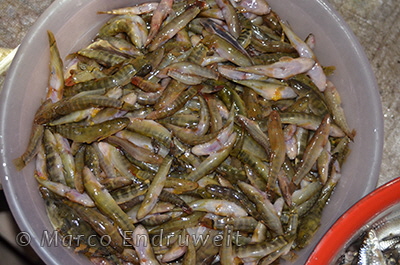 Poropuntius huangchuchieni is often brough to markets. However, its flesh is not tasty and loose. Hence, it does not make a good cooking.

I obtained this 164 mm TL (137 mm SL) specimen of Clupisoma sinense which is now stored in KIZ under the inventory # KIZ 2010003092. Even though this species is ranked ‘LC = least concern’ in the Red List, I have not seen it before in the wild. I do not think this ranking reflects the actual natural stock.

I also took this specimen of Poropuntius huangchuchieni for my research because it was still in good condition. It now bears the KIZ # 2010003093; 191 mm TL; 154 mm SL.
There are basically two species of Glyptothorax in the Luosuojiang River basin; G. macromaculatus and G. laosensis.
This is G. macromaculatus.

This little girl starred at me, put a course on me. Fishing was unsuccessful although the river was promising.

Schistura macrocephalus is this region’s predominant nemacheilid. I just caught one specimen in one hour fishing.